As the financial climate makes the possibility of journal agreements being cancelled more likely, and the emphasis in those agreements shifts towards paying for publishing services rather than paying for access to content, it is more important than ever to be clear about what your institution would have access to if you decided not to renew your subscription. This blogpost looks at how that access works, what problems can occur and how we at Jisc think the situation could be improved.

Why PCA matters
Institutions have been accumulating – and paying for – post-cancellation access (PCA) rights to content over successive subscriptions for decades, but they risk losing those rights as the focus of these agreements shifts from reading to publishing. The move towards open access (OA) should not be seen as a solution to this problem, as there will always be content that stays behind a paywall; either because it was published before OA was ever considered, or because it originates from outside the UK, or from countries without OA policies. As such, retaining, strengthening and clarifying PCA rights are important aspects of Jisc Collections’ open access negotiations in our agreements, especially if the option of cancellation is used to strengthen our position in compelling publishers to transition to affordable open access. In all our transitional agreements, we are working for PCA rights to be improved or as a last resort maintained at existing levels, and certainly made clearer.

Policies regarding PCA tend to vary, so if you’re considering cancelling a big deal you need to be certain about which titles and which years’ coverage you are entitled to under your current and previous licences with the publisher.

Tracking your PCA rights: core collections
Over the years you will have probably subscribed to certain journals on a more or less continuous basis; a relatively stable set of titles renewed under each successive licence agreement. These might be described by their publisher as Maintained or Subscribed Titles, or as a Core Collection. In theory they were at some point set down in writing and confirmed by a quote. The publisher might have allowed you to cancel a certain number of them each year, or to swap them for other titles of similar value. Again, such changes should have been recorded somewhere for future reference or audit, as accumulated PCA rights up to the time of the change will survive. If, instead of a bespoke collection of selected titles, you’ve subscribed to a subject collection defined by the publisher, this should have been referenced in the original licence and recorded at the date of signature.

Transferred titles
Publishers often lose the rights to certain journal titles or acquire the rights to titles from other publishers. Again, your PCA rights will survive this change, and it’s important to remember that they attach to the title, not the publisher, so it is the responsibility of the new owner of the journal to provide your access to it. The same principle applies if a publisher transfers a title internally from one subject collection to another: PCA rights should be maintained.

Such changes to publishers’ holdings or subject lists are tracked by the KB+ service, and the Jisc model licence now refers to the collection lists as recorded and updated in KB+, to ensure that titles added over the licence term are recorded as forming part of the licensed material. More information can be found here: https://www.jisc.ac.uk/guides/tracking-ongoing-access

Front files vs back files
Some publishers separate their online journal coverage into a front file and a back file. The back file will contain all journal material published by that publisher up to a certain date (the end of 1997, say) and the front file will contain everything published after that date (1 January 1998 onwards). While you’re subscribing to a deal with that publisher you might be offered access to the entire front file of whatever titles are included in that deal, but this access usually ends if you cancel the deal: PCA would only go back as far as the date the institution started to subscribe. Access to back file content is usually reserved for core (or maintained/subscribed) titles, unless you have subscribed (or purchased perpetual access to) the back file under a separate licence agreement with the publisher.

How PCA works: a scenario
University of Newtown began subscribing to selected science journals from the same publisher in the 1980s and 1990s (Journals A, B and C in the diagram below). In 2006 it decided to pay a top-up fee to subscribe to the publisher’s entire STM Collection and has done so continuously ever since. The deal gives them access to the entire bundle of STM journal content in the publisher’s front file (1998 onwards) while they maintain their agreement, and coverage of Journals A, B and C back to the date they began subscribing, although Journal C transferred to another publisher in 2010, at which point they stopped the subscription. The university decided to cancel this STM Collection deal at the end of 2018.

PCA rights are as follows:

In the diagram, the blue squares show the content with PCA rights attached, while the green represents content where no PCA rights would be retained after cancellation. 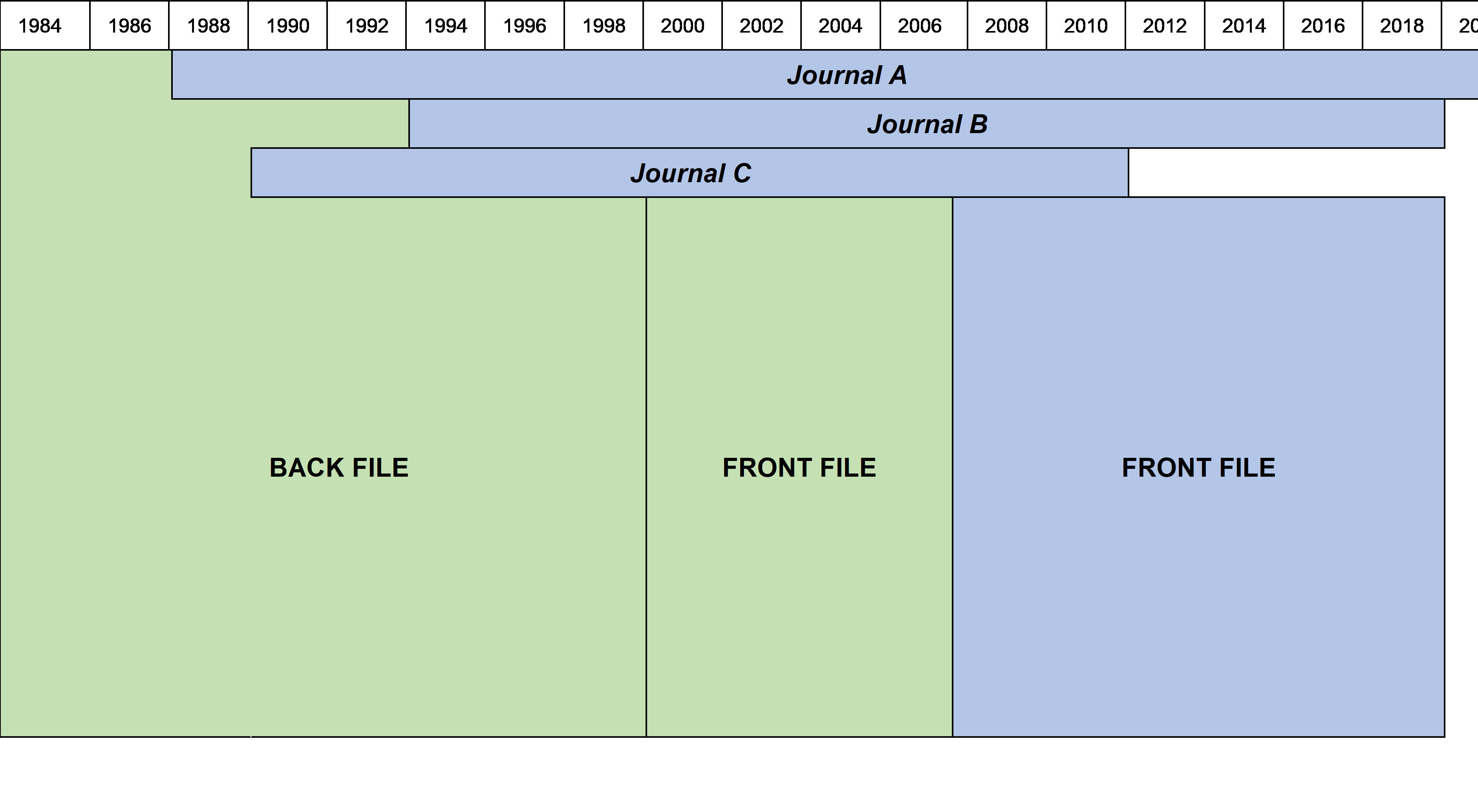 How can we make PCA better? A call to action
Of these two categories, Type 2 is clearly an improvement on Type 1, but it still does not provide institutions with the complete coverage they need to move to transitional deals with full confidence. It’s also clear that PCA arrangements have the potential to be very complicated and require good record keeping and audit trails on the part of both the institution and the publisher. Problematic gaps in coverage can develop if an institution cancels individual titles, and access can be spread across different publisher platforms if the rights to titles change hands. Moreover, the amount of work involved in keeping tabs on access entitlements is often disproportionate to the amount of use this older content actually gets; Jisc’s studies show that by the far the highest concentration of usage of journal content occurs in issues published in the previous two years.
Here at Jisc we’d like to see a more straightforward solution; we’d like to see publishers offer post-cancellation access to the whole of the relevant journal collection – not bound by the start dates or individual title histories. This small change would make life easier for institutions and publishers, with little or no cost to the publishers.